Hey, what do you know? PA Senator , Rick Santorum is an idiot.
Aligning himself to more extremist right wing conservitivism, he has crossed the line into douche-bagism. 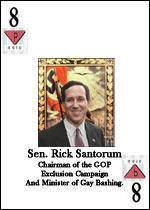 Latest case in point: A Catholics Online website published Santorum’s comments on the 2002 Catholic Church child- molestation scandal,”[W]hile it is no excuse for the scandal, it is no surprise that Boston, a seat of academic, political and cultural liberalism in America, lies at the center of the storm.”
Ok………
I have to agree with PGH journalist John Mcintire, “Only in Rick Santorum’s mind does a priest think to himself, ‘You know, those Havard professors sure are liberal, and you’ve got all those peaceniks marching around, so I think I’ll pick me out a choice child and trip the light fantastic, if ya know what I mean.”


• To produce beauty the artist must be in love with beauty
• “All pictures that are painted with sense and thought are painted by madmen. For the greater the fool is the pencil more blessed and when they are drunk they always paint best.” ~William Blake
• Art is not to be regarded seriously as attaining truth; and he who listens should be on his guard against her seductions” ~Plato
• Give the eye a little time to overcome the panic, to calm down until the had dares to trust it
• Distortion is not a license of the painter but an aesthetic requisite of from
• Conflict between instinctive drives and formulative energies is the key problem of creative process.
• Great works of art are complex and various in their appeal.
• There is not one type of art to which all types of men should conform
• Each culture has their own kind of art.
• Every stroke of my brush is the overflow of my innermost heart.
• A painter is not admirable unless he is universal
• Art should be the basis of education // Art is representation science is explanation of the same reality // Art is present in everything we make to please our physical organs of perception
• When we ask “What is art?” we are really asking what is the quality or particularity in a work of art that appeals to us
• Form cannot be perceived except as color
• Art is an attempt to revert from the disintegration induced by civilization to organic modes of feeling. What has always been forbidden is the truth.
• Art is what you can get away with.
• I am one thing, my art is another
• Art is a mere imitation of an appearance of reality an artist will never even be able to imitate well, because his knowledge of it. However diverting, art cannot be a serious occupation. ~ Plato
• A child’s mind is graphically expressed
• El Greco painted the human flame, the astral body
• Art is a beautiful thing, if one does not have to make a living at it.
• Culture is a real need for art

more.. cause I need somewhere to store them....

• Paintings aren’t just objects, they’re personal statements. Art isn’t about cynicism, it’s about faith and hope. Paintings are physical. So is the act of creating them. This physicality should be emphasized.
• Make marks all the time
• Don’t just be a painterly painter, pack images with as much as I can. Any material I touch will leave my name on it. … I did that. It will take my form. No need to make the distinction between mediums. It’s the object that’s most important.
• The sky starts at out feet. ~ Howard Rosenthal
• The artists emotions will go wherever the passion takes them losing control over formative faculties. Emotion does not contribute impulses of its own; its merely an effect of the forces taking place in the mind.
• A message will not be heeded unless it is first entertaining.
• Art is the method to gain access to the original messages that were impressed on our souls during creation.
• Form must be willed.
• “Drawing is not what you see but what you make other’s see” ~ Degas
• “Art is not truth. Art is a lie that makes others realize the truth, at least the truth we can understand. The artist must know the manner where by he convinces the others of the truthfulness of his lies. “ ~ Picasso
• Art creates form long before it is beautiful
• We form our eyes by closing them. The eye must be taught to look at nature; how many have never seen it and never will. This is the agony of our lives. Knowing how to draw is knowing what to look for.
• Art resides in the soul and is a certain reflection of the soul.
• Art is a virtue- not a moral virtue, a virtue of practical intellect.

1. what is the artist trying to accomplish?
2. What was the intent? Content? Message?
3. Is the message relevant? Is it serious?
4. Is the work Narrative?
5. What is the Why and the How of the content?
6. Is the work open to a variety of interpretations?
7. Does it evoke an emotional response?
8. Does the work surprise you?
9. Does it take chances?
10. Is the composition appropriate to the theme?
11. Does the composition compliment or subtract from the artists message?
12. Is there a balance of craftsman ship and concept?
13. Does the artist have a sense of control over the material?
14. Does the work seem like an accident?
15. Does it make any references to any other work you’ve seen?
16. What is the artists involvement with the subject work?
17. Do you feel the artist’s hand in the work or is it cold & impersonal?
18. Is it competed? Sophisticated?
19. Is the idea and or style carried through the whole work?


• Art is cheap and should be available to everyone.
• Art and life are one through composition as individuality. The way we are composed is our individuality.
• Making things is like birth; life is art, making one of repose and motion. Matter makes mind.
• Art is the seeing of relation among objects & expresses the attitude of an individual thing.
• When artists look at objects he finds a relation among them. Relation in art is giving life to objects. Art shows the inanimate as alive.
• You will study the works of Raphael, Michelangelo, and their imitators; but let me tell you, if you take these people to seriously, then you will be lost. ~ Boucher
• Small rooms discipline the mind, large ones weaken it. The longer the wall, the less light there will be, ~ daVinci
• Art has to have something to make you scratch your head. ~ Ruscha
• It makes me think of something other than what I am looking at. Its about something else. ~ Cindy Shrum
• Art was formed by the same symbolic order that formed God. Art enabled man to connect with the infinite. Art was mastery over death. Art died with the death of God. And was reborn with the birth of capitalism. Exploit the masses. Art is propaganda.

The connection between art and science in clever quotations

“Notebooks? What good are notebooks?”

• "There are two kinds of artists, revolutionaries and plagiarists." ~ Gauguin
• Art is nature seen through a temperament.
• Art and science break nature down into component parts to analyze the relationship of those parts.
• In Art and science, a new way to think about reality beginning with the assimilation of unfamiliar images
• Rarely is artwork explained in terms of how it anticipates the future.
• Revolutionary art & science attempts to speak about matters that do not yet have words, That is why it is so poorly understood by people in outside fields.
• Art & science have a unique form of language: volume space, mass, force, light, color, tension, relationship and density.
• The four basic elements: air- water- fire- earth became the four constructs of reality: space- time- energy- matter
• The alphabet was civilization’s 1st abstract art form
• The Greeks 3 aspects of comprehension of abstraction linearity and continuity led to a new conception of space, time and light
• Very few lines in nature are ruler straight, All naturally occurring lines are curved and arabesque.
• The body combined with geometry in 5th century BC as Polyclitus wrote the first “Kanon” which measured the relationships of the human body. The ratio of the golden rectangle is 5:8.
• Man is the measure of all things that he is and that he is not.